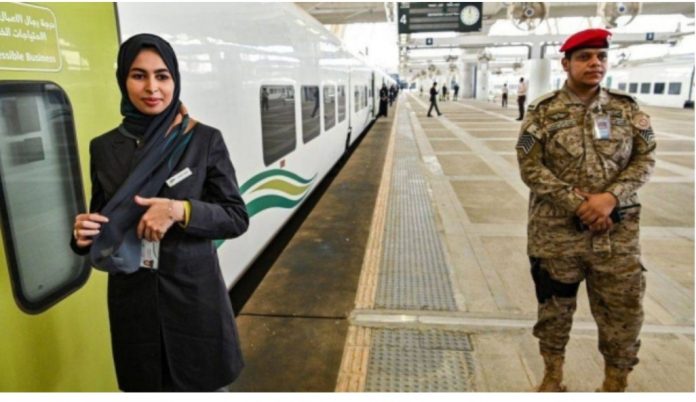 Thirty one Saudi Arabia’s first female Train Drivers, have embarked on their Cab Apprenticeship on the Haramain High Speed Train that operates between Makkah and Madinah via Jeddah.

They began their training earlier this year to become the first female Train Drivers in Saudi Arabia.

The 31 women will be joining experienced Train Drivers in the Cab over the coming five to six months as part of the second phase of their training.

Since the training program first began in March, the group has completed a total of 483 hours of theoretical training, including basic railway knowledge, traffic and safety regulations, work hazards, firefighting, as well as technical aspects related to the train and railway infrastructure.

Spanish Company, Renfe, the largest shareholder in the consortium managing the High-Speed Rail, and the Saudi Railway Polytechnic (SRP) are responsible for the training effort and have trained more than 130 Saudi nationals over the past nine years.

A job advertisement placed earlier by Renfe to recruit 30 women Train Drivers in Saudi Arabia had an overwhelming response from across the Kingdom.

About 28,000 women jumped on the opportunity to potentially drive a train.

Out of the group, 145 were selected for in-person interviews and only 34 made it to the first phase of training.

Out of the 31 that passed the theoretical part of the training, 70 percent has a University Degree.

That percentage is only 30 percent for the male interns taking part in the current hiring and training phase.

It is expected that by the end of next December, the trainees will start driving Trains between Saudi cities on their own after passing all the tests and training.

In the coming phases, the number of Saudi men and women Drivers will be increased, as it is expected that the demand will grow significantly during the next few years to travel by train, especially during the Hajj and Umrah seasons.

Share your thoughts on the story, 31 Saudi Women Become First Female Train Drivers with Nigerian Kicker in the comments section.