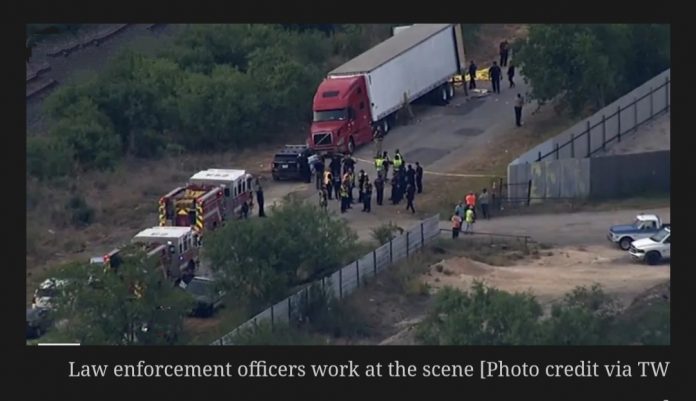 At least 46 people were on Monday found dead inside a truck in San Antonio, Texas according to Al Jazeera.

It appeared to be a human smuggling attempt along the United States-Mexico border, it said.

San Antonio Fire Chief, Charles Hood, said 16 other people found in the trailer on Monday were transported to the hospital for heat stroke and exhaustion. They included four minors.

“The patients we saw were hot to the touch. They were suffering from heat stroke, heat exhaustion. There were no signs of water in the vehicle,” Al Jazeera quoted Mr Hood as saying.

“It was a refrigerated tractor-trailer, but there was no visible air conditioning unit on that rig,” it further explained.

Also, a Police Chief William McManus said a city worker at the scene was alerted to the situation by a cry for help shortly before 6 p.m. on Monday (23:00 GMT).

Officers arrived to find a body on the ground outside the trailer and a partially opened gate to the trailer, he said.

The vehicle was found next to railway tracks in a remote area on the city’s southern outskirts.

Mexico’s Foreign Minister Marcelo Ebrard called the suffocation of the refugees and migrants a “tragedy in Texas” and said the local consulate was en route to the scene.

He said two Guatemalans were among the victims and that the trailer had fake European Union plates.

“They had families and were likely trying to find a better life,” he said. “We hope those responsible for putting people through such inhumane conditions are prosecuted to the fullest extent of the law.”