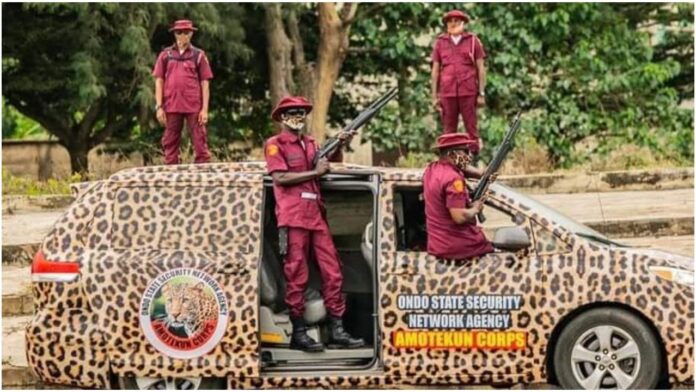 Ondo State Security Network Agency, Amotekun, has dislodged a six-man gang that specialise in drugging and hypnotising their victims.

The State Commander of the Agency, Adetunji Adeleye, who disclosed this to newsmen said, the suspects were arrested at their hideout.

Adeleye stated that the arrest of the syndicate was part of the successes recorded in its drive to ensure a crime-free Yuletide in the State.

He also revealed that other suspects involved in kidnapping, rape and armed robbery were also arrested by his men.

“The gang use chemical substance to spray the room of their victims, so, they will sleep off; they will break the burglary, enter their houses, disposes them of their valuables while some of them are raped.

“They don’t normally have direct access to the victims, what they do is to jump across their fences, and pump in with a syringe, and spray chemicals into their rooms.

“They will wait for about 30 to 40 minutes, every living thing inside the room sleeps off. So, whatever they do, you don’t know again,” Adeleye explained.

He stressed that upon the conclusion of investigation, the suspects will be arraigned in court.

Share your thoughts on the story, Amotekun Dislodges Gang Hypnotising Victims In Ondo with Nigerian Kicker in the comments section.