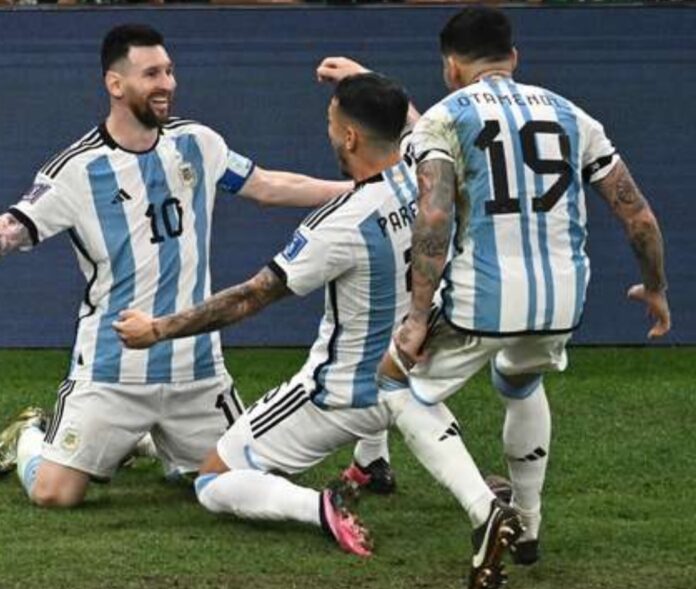 The match had ended 3-3 after extra-time, necessitating penalty shootout to decide the winner of the encounter.

The Messi opened scoring on 23rd minute from the penalty spot. Messi won the battle of wills and sent an unstoppable penalty past Hugo Lloris into the bottom right corner.

Argentina made it 2-0 on 36th minute. Alexis Mac Allister found himself with the ball at his feet in space after a lightning counter attack.

He looked and up slide the ball to Angel Di Maria, who coolly slotted the ball past the keeper from close in.

Kylian Mbappe scored from the penalty spot on 80th minute to pile pressure on Argentina.

Emiliano Martinez got a hand on the penalty from Mbappe, but he could not stop it from flying into the bottom left corner.

A minute later, Mbappe scored a brilliant goal for his brace and his seventh goal of the tournament.

He showed good awareness inside the box as he latched on to a brilliant pass and fired a first-time shot into the back of the net, with Marcus Thuram assisting in the goal.

Messi got his brace for Argentina on extra-time. A rebound wrong footed everyone except Messi and he slammed the ball into the open net from close range.

Mbappe scored his hat-trick two minutes to the end of extra-time from the penalty spot to make it 3-3 for France.

Mbappe played the ball into the left of the net, giving goalkeeper Emiliano Martinez no chance for his 8th goal of the tournament.

Share your thoughts on the story, Argentina Wins 2022 World Cup Through Penalties Against France with Nigerian Kicker in the comments section.