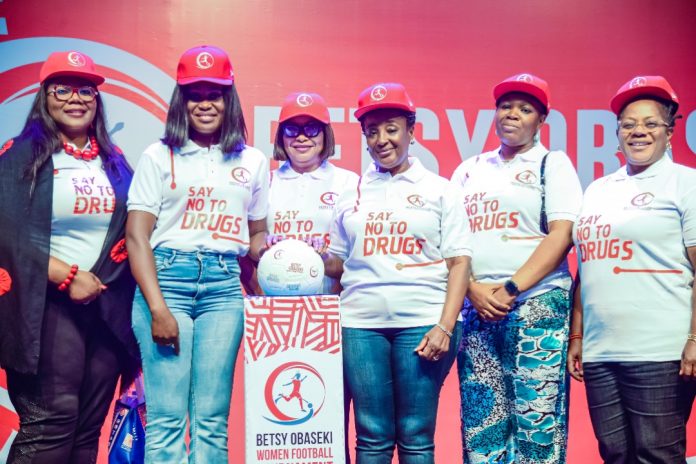 Second edition of the Betsy Obaseki Women Football Tournament (BOWFT), has kicked off in Benin, the Edo State Capital.

Edo Queens Football Club will face Royaltoms International FC of Lagos and Royal Queens FC of Warri in Group B.

At the draws, on Tuesday, Nasarawa FC and Brave Heart Ladies FC were to face FC Robo and Confluence Queens in Group A.

Naija Ratels, Sunshine Queens and Fortress Ladies will slug it out in Group C while Delta Queens, Osun Babes and Heartland Queens will compete for glory in Group D.

Edo State First Lady, Mrs. Betsy Ifueko Obaseki, while welcoming the participating teams to the state, said the government remains committed to the all-round development of youths in the state.

“We had 12 participating teams last year and increased the teams to 13 this year. We will continue to grow and improve, ensuring that we make the games a much bigger competition.

“One of the very outcomes that we have had from this competition was that our first outing was adjudged by international stakeholders as world-class. The world football body, FIFA, had, at an event earlier this year in Qatar recognized our first edition as a model event. That award was received by our Deputy Governor, Comrade Philip Shaibu, acknowledging our commitment to youth development through football, especially women.

“That’s a huge achievement, considering that it is our first outing and we will sustain efforts to support our youths and help them realize their fullest potentialities,” she said.

Speaking on the theme of the competition, “Say No to Drugs” the Edo State First Lady said the State Government was using the opportunity of the games as a platform to proffer solutions to societal problems.

“Last year, we focused on tackling human trafficking and illegal migration, but this year, we will concentrate on reducing the incidence of drug abuse.

“Drug abuse is a huge problem in the country. In fact, it is bigger than imagined. It has become endemic and is fast becoming a pandemic. Drug abuse is destroying and ruining lives of many, from children in primary schools to married women. This year’s edition will provide a fine platform to create more awareness to reduce the incidence of drug abuse. We will have a seminar on September 15, 2022 in this regard,” she said.

According to her, Edo State was setting the pace in football in the country.

“Today, we are going to unveil branded and customized soccer balls that will be used throughout the tournament, which is the first in the country. Also, Edo is the only state where female players are paid the same remuneration as the men.

“So, when we say we are leading football in Nigeria, you can see that it isn’t an empty boast. It is the truth and reality, because it is in our blood. We are doing it in football now, and taking the reforms to all other areas of human endeavors,” she explained.

Mrs. Obaseki, however, noted that the winner of the Tournament will smile home with the sum of N5million, while the first and second runner ups will get a cash reward of N2.5million and N1.5 million respectively.

There will be consolation prizes for every participating team.

Share your thoughts on the story, Betsy Obaseki Women Football Tournament Kicks off In Edo State, with Nigerian Kicker in the comments section.