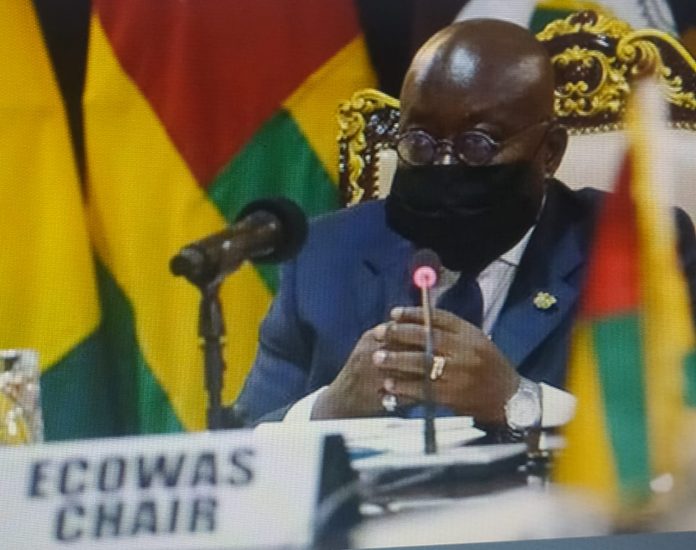 President Nana Addo Dankwa Akufo-Addo of Ghana, has ended his tenue as Chairman of ECOWAS.

Authority of Heads of State, in a closed-door session after the opening ceremony of the summit, elected the President of Guinea-Bissau, Umaro Mokhtar Sissoco Embaló, as the new ECOWAS Chairman to succeed Akufo-Addo.

The 49-year-old Political Scientist, who retired at the rank of Brigadier-General before joining politics, has been President of Guinea-Bissau since February 27, 2020.

He served as Prime Minister between November 2016 and January 2018.

Delivering his last address as the Chairman of ECOWAS,  Akufo-Addo called on ECOWAS countries to work to enhance their production in agriculture adding that it was the surest way to deal with the sharp increases in global prices, particularly of food and petroleum products.

“We are all victims of global inflationary pressures, which have exacerbated the food crisis in many parts of our region, instigated by the decline in production due to the impact of climate change,” he said.

Akufo-Addo noted that the summit was taking place in a very challenging global context, characterised by the effects of the COVID-19 pandemic and the difficult security and political
situation in the region and in the world.

Speaking on the increasing threat of terrorism, Akufo-Addo indicated that it was imperative to implement the regional action plan against terrorism and coordinate various security initiatives to reinforce the collective response to the destabilising threat.

“Our determination in this area must be stronger than ever. Equally unshaken must be our resolve to maintain the stability of our region and its member states,” he added.

He said the region continued to be the targets of indiscriminate and barbaric terrorist attacks, resulting in the loss of many innocent lives and the deterioration of the humanitarian situation of the targeted countries.

“These terrorist attacks are now not only focusing on the Sahel but also expanding to the coastal states in our region,” he said.

He called for a minute’s silence in memory of all the victims of terrorist attacks in the sub-region and their families.