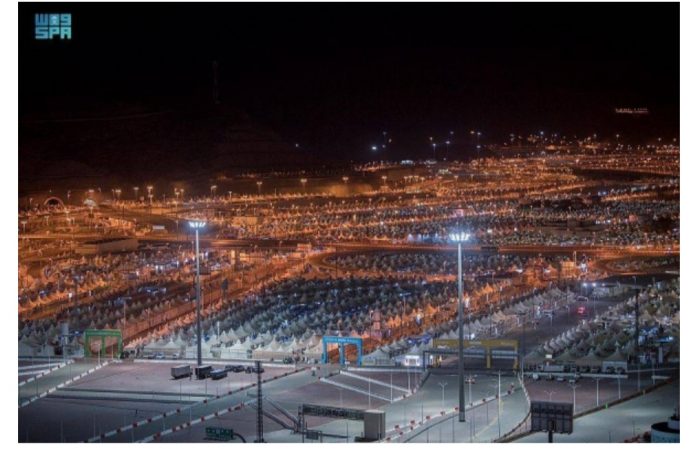 As the annual pilgrimage of Hajj is 11 days away, the high tech tent city (Mina) is all geared up to receive the guests of God.

Deputy Minister of Hajj and Umrah, Dr. Abdul Fattah Mashat revealed that the refurbishing of infrastructure facilities in Mina has been completed.

He disclosed this on Friday in Makkah while addressing the expanded meeting of the officials of the Coordination Council for Companies and Establishments Serving Pilgrims, and the service providing companies for domestic pilgrims.

Mashat said that the entire system of online platforms for serving domestic pilgrims will be reconstructed after the Hajj season adding that the evaluation of companies is aimed at improvement of their services and not to impose penalties and fines against them.

The Deputy Minister stressed that pilgrims must be made aware of all the challenges that they are supposed to tackle with while performing their obligatory ritual of Hajj taking into account of the fact that most of the pilgrims are performing  Hajj for the first time.

“The prime concern of the ministry for this season of Hajj is the evaluation of the satisfaction of the pilgrims through a team, and that is in cooperation with the Coordination Council,” he pointed out.

Mashat said that it is a good thing to produce media products that contribute to improving the level of expectations of the pilgrims at the normal level.

“A complete file will be published on the mechanism of measurement and standards that it is being worked out, and the measurement of satisfaction is aimed at continuous improvement of the Hajj facilities and services with a clear and specific measurement methodology,” he said.

Mashat also said that 22,000 domestic pilgrims carried out the process of evaluating the services of pilgrims last year, and the satisfaction rate was found high among the pilgrims.