International Conference On Prophet Muhammad’s Biography Kicks Off In Pakistan 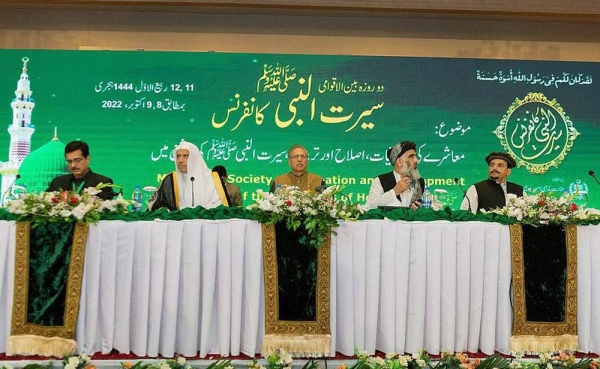 Report from Islamabad, the Pakistani capital says, International Conference on the Biography of Prophet Muhammad (PBUH), has kicked off Islamabad under the patronage and attendance of the Pakistani President Dr. Arif Alvi, a group of senior scholars, members of the parliament and the Senate, and the diplomatic corps.

Pakistan invited the Secretary-General of the Muslim World League (MWL), Chairman of the Association of Muslim Scholars Sheikh Dr. Mohammed Bin Abdul Karim Al-Issa as the main guest at its global conference to celebrate the biography of the Prophet.

Dr. Sheikh Al-Issa was honored by the Pakistani President with the Conference’s Presidential shield.

In his speech, President Alawi welcomed Sheikh Dr. Al-Issa, praising his speech in which he shed light on the life of the Prophet and the good teachings contained in it not only for Muslims but for all humanity.

He urged all Muslims to follow the Sunnah of Prophet, which aims primarily to enhance human values and honor human beings.

“Social damages such as polarization and hatred cannot be dealt with effectively unless we follow the life of our Prophet Muhammad,” Dr. Alvi said.

He also called for the promotion of harmony and tolerance among followers of religions, considering this as vital to peaceful coexistence in society.

In his speech at the conference, Sheikh Dr. Al-Issa said the biography of the Prophet is the most accurate and comprehensive of what was written about the greatest prophet, adding that Prophet Muhammad’s biography teaches us tolerance, forgiveness, and wisdom.

He also highlighted some of MWL’s efforts in introducing the biography of Prophet Muhammad, stressing that the League launched museums of the Prophet’s biography around the world, starting from its main museum in Madinah.

These museums included accurate documentation of the biography of the Prophet, through a presentation that adopted the best contemporary technical means.

“Yes, these museums provided a comprehensive description of the Prophet’s biography with modern methods, which transport you emotionally to those blessed spaces, bypassing the usual presentation (through books, lectures, etc.), to a presentation with modern technology.

“It is as if you are living in that atmosphere, through the latest advanced display technologies,” he added.

He concluded by praying to the Almighty Allah to bestow his mercies on Pakistan and protect it from the damages of the floods that afflicted it, heal the sick, and the displaced.

“It is our duty in the Muslim World League to do everything we can towards our people in Pakistan, and we have already directed our office in Islamabad to take all measures towards this matter,” he stressed.

The country’s Minister of Religious Affairs and Interfaith Harmony and Mufti Abdul Shakur Sardar Khan stressed that the participation of the MWL Secretary-General, along with senior scholars and sheikhs, represents an added value to the importance of the conference.

The conference aims at highlighting the Prophet’s biography, the application of prophetic teachings and morals, to consolidate them in Islamic societies, and to clarify the true picture of Islam.

Addressing the participating scholars, the Chairman of the Central Association of Ahl Alhadith, a member of the Pakistani Senate, Sajid Mir stressed the need to combat corruption and other social unrest by following the Sunnah of the Prophet, which has provided an integrated approach to solving various social problems and is considered golden principles for humanity.

Secretary-General of Pakistan Ulema Council (PUC), a member of the Pakistani National Committee for Scholars and Sheikhs Allama Arif Hussain Wahidi welcomed the MWL secretary-general, adding, “The mission of the Prophet (PBUH) is considered a mercy to the world, and following the teachings contained in the Prophet’s biography is a source of unity for the Islamic nation”.

Sheikh Dr. Al-Issa held several meetings on the sidelines of his visit, where he met in Islamabad with the Chairman of the Senate of Pakistan Muhammad Sadiq Sanjrani, who praised the secretary-general’s international efforts in introducing the truth of Islam, combating “Islamophobia”, and his initiatives to spread the message of peace and tolerance, and promote harmony between religions and cultures.

“The global role you are playing today to correct misconceptions about Islam we have seen is a strong and influential role and works directly to reduce Islamophobia,” he said. – SPA

Share your thoughts on the story, International Conference On Prophet Muhammad’s Biography Kicks Off In Pakistan with Nigerian Kicker in the comments section.