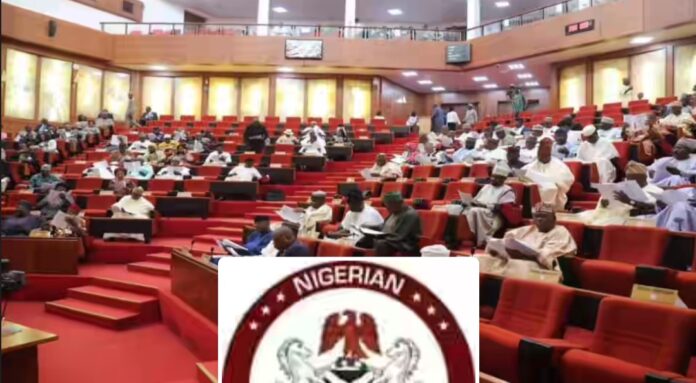 National Assembly says lack of states’ response is causing delay in the passage of its bills from the current Constitution alteration exercise.

Leadership of the Senate and the House of Representatives Committees on Constitution Review stated this on Tuesday in Abuja while briefing newsmen on the progress of the 44 Constitution amendment Bills it transmitted to the States Houses of Assembly across the country.

It said, after several meetings and engagements with the State Houses of Assembly, the Joint Committee of the Senate and the House of Representatives recommended 66 Constitution Alteration Bills for passage.

“We considered that those 66 bills have a considerable level of national consensus as garnered from public consultations.

“Out of the 66 Bills, 44 were approved by the Senate and House of Representatives. Subsequently, the 44 Bills were transmitted to the 36 State House of Assembly on 29th March 2022 for approval in line with Section 9(2) stipulations of the Constitution.

“The 44 Bills transmitted to the State Houses of Assembly seek to, amongst others: strengthen the legislature’s authority to enable it to serve as an effective pillar of checks and balance to the executive; strengthen independent constitutional bodies; create and strengthen a culture of good governance; address issues of revenue leakages and unbridled government spending, and enhance effective administration of justice in Nigeria,” it said.

It pointed out that six months after the transmission of these Bills to the State Assemblies, it is “most disheartening to inform you that only 11 State Houses of Assembly have demonstrated their independence and loyalty to the Constitution regarding the 44 bills.”

“25 State Houses of Assembly have yet to consider and vote on these bills.

“So far, only Abia, Akwa-Ibom, Anambra, Delta, Edo, Kaduna, Katsina, Kogi, Lagos, Ogun and Osun States have successfully considered, voted on, and forwarded their resolutions on the 44 bills to the National Assembly.

“More worrisome is that while we are still expecting the receipt of the resolutions of the remaining Houses of Assembly, we received a letter from the Conference of Speakers of State Assemblies informing the National Assembly that the remaining states will not act on the 44 Bills unless the National Assembly passes four new Bills they have proposed in the letter,” it explained.

It further explained that from the process’s inception, they invited written submissions from citizens, interest groups, socio-cultural organizations and civil society organizations. Subsequently, they held zonal public hearings at 12 centres across the six geo-political zones; and a national public hearing in Abuja.

These Bills intend to decongest the Exclusive Legislative List by moving some items to the. Concurrent Legislative List, thereby giving more legislative powers to States. The items include Airports; Fingerprints, Identification and Criminal Records; prisons and railways. These amendments strengthen the federal system and ensure that governance responsibilities are efficiently allocated to the level of Government best able to manage them. It also allows states to generate, transmit and distribute electricity in areas covered by the national grid within their respective domains.

Also, Constitution of the Federal Republic of Nigeria, 1999 (Fifth Alteration): Bill, No. 48, 2022 (Power to Summon the President and Governors).

Constitution of the Federal Republic of Nigeria, 1999 (Fifth Alteration) Bill, No. 58, 2022 (Independent Candidacy).

The Bill seeks to alter the Constitution to allow an independent candidate to contest for an elective position. This amendment expands the space for democratic participation by providing a platform outside political parties for persons to participate in and contest elections.

Share your thoughts on the story, Lack Of States’ Response Stalls Passage Of 44 Bills At National Assembly with Nigerian Kicker in the comments section.