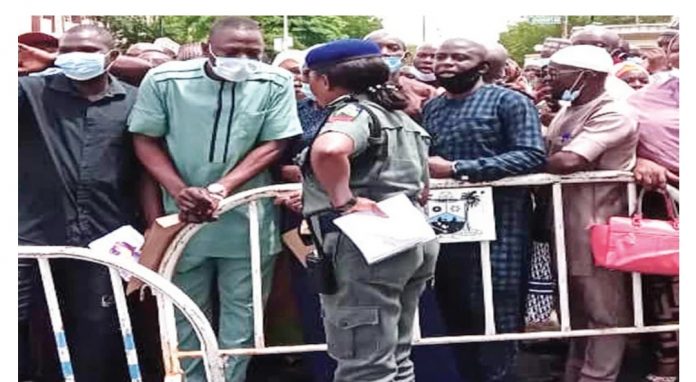 The protesters, reportedly converged on the Alausa Mosque before marching towards the Lagos State House of Assembly, asking the state Governor, Babajide Sanwo-Olu, and the Speaker of the House of Assembly, Mudashiru Obasa, to reduce the fare and extend the deadline for payment.

One of the protest leaders, Emmanuel Muflideen, said, “We intended to observe the holy pilgrimage, but we were affected by the COVID-19 pandemic that occurred in 2020. Just recently, a commissioner invited us to the Old Secretariat Mosque and informed us that they were going to increase the money with a token, which we pleaded against.

“Furthermore, we were told that those intending pilgrims who paid their money in 2019 and 2020 should pay the total hajj fee with the deadline from this Monday to Wednesday and those who made payments in 2021 and 2022, must pay the balance on Thursday and Friday, which is a total of five working days.

“We don’t have anything other than to appeal to the Lagos State governor and the Speaker of the House of Assembly to reduce the fees.”

“They have indiscriminately increased the hajj fare from N1.3m to N2.64m, which is not good. How do I get the money? Do they want me to steal? I cannot afford the fee. So far, I have only deposited N1.3m.

“We cannot afford it at this moment; for those who can, Alhamdulilah. That is our stand,” she added.

A member of the Assembly, David Setunji, assured the protesters that the government would looked into their complaints.

Meanwhile, the state Commissioner for Home Affairs, Anofiu Elegushi, in a statement, said his ministry would hold a meeting with the intending pilgrims.

He noted that the increment was necessitated by “an increase in foreign exchange rates, Value Added Tax from Saudi Arabia, and the cost of aviation fuel for the carriers.”