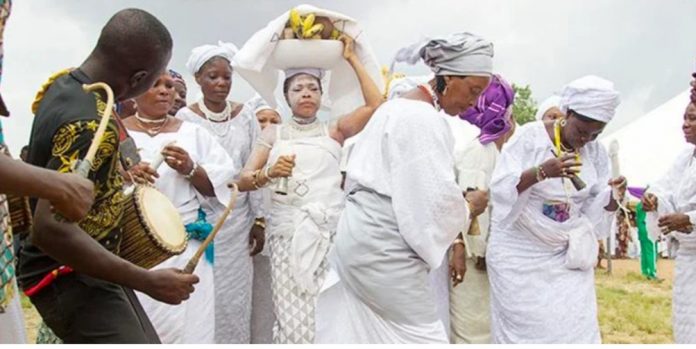 Popular Osun Osogbo Festival kicks off today August 1st 2022 in Osogbo, the Osun State capital and expected to end on the 29th of August, 2022.

The Festival is an Annual event that is usually celebrated in August at a sacred grove, to worship Osun, the Yoruba goddess of fertility.

The festival is believed to renew the contract between humans and deities.

It attracts huge tourist attraction and it is usually attended by tourists from all over the world, as well as Osun worshippers.

Events lined up for the festival include the traditional cleansing of Osogbo, which is known as ‘Iwopopo’, on August 1, followed by the lighting of the 500-year-old six-point lamp called ‘Atupa oloju merindinlogun’ which comes up three days after the cleansing of the land.

‘Bibo Ade Oba Osogbo’, which is meant to honour past Kings of Osogbo is slated for August 8, 2022.

On August 11 is the ‘Dida Ifa arugba’, where a young virgin woman (arugba) of a royal lineage, offers sacrifices to the deity.

This will be followed by the ‘Dida Ifa Arugba’, while the festival will end with the ‘Osun Ajigun’ on August 29, 2022.

Share your thoughts on the story, Osun Osogbo Festival Kicks Off Today with Nigerian Kicker in the comments section.