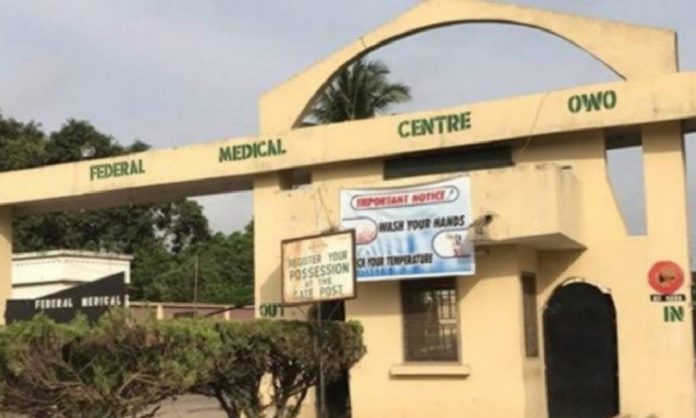 Reports from Ondo, the Ondo State capital say, Medical Doctors, under the Association of Resident Doctors, ARD, have commenced a two-week warning strike at the Federal Medical Centre in Owo.

President of the ARD, FMC, Owo branch, Dr. Olaopa Olutobi Gideon said, the strike action was due to what they described as a shortage of personnel adding that Doctors were working “under extremely stressful conditions.”

Shortly after the Association’s General Meeting in the Owo, Headquarters of Owo Local Government Area of the state, the Doctors announced their decision to down tools.

Gideon said only 80 Resident Doctors and health officers are currently employed by the Hospital and that there hasn’t been any new hiring of personnel there since 2018.

“More than 300 Doctors and House Officers used to work at the Hospital, but many of them have since left.

“One person is now doing the job of five persons and we have been on this issue since last year. The situation keeps getting worst because a lot of people are leaving the system.

“There has not been any employment in the FMC Owo, since 2018. The employment of additional 200 doctors and health officers will solve the problem.

“They are also not paying for our extra work. We are doing duty call every day.”

They also complained about the low quality of the Hospital meals and the absence of secure housing for their colleagues employed at the Akure hospital annex.

The Hospital’s Public Relations Officer , Olufunsho Ijanusi, who confirmed the industrial action, said the Hospital’s Management had been keeping an eye on development.

Ijanusi said the Chief Medical Director of the Hospital, Dr. Liasu Adeagbo, had just arrived from Abuja and had met with the ARD leadership pleading with them to be patient.

He clarified that several bureaucratic bottlenecks were delaying the hiring of extra staff members at the Hospital but pledged that Management would soon find a solution.

Share your thoughts on the story, Resident Doctors Down Tools In Ondo State with Nigerian Kicker in the comments section.