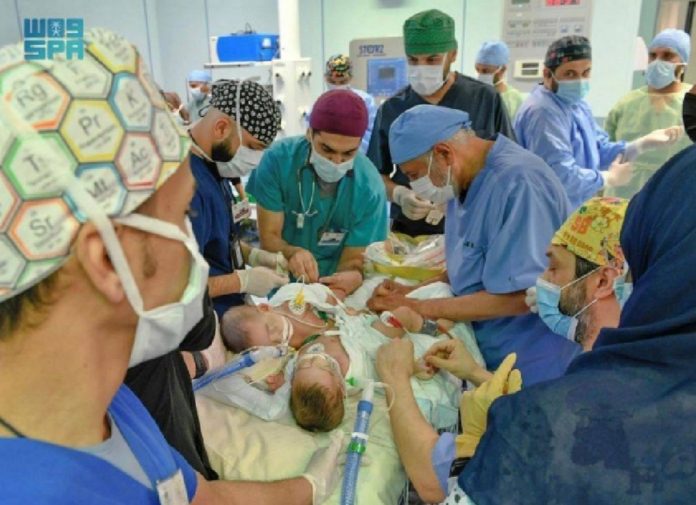 The first operation of its kind took place in the Kingdom in 1990 through the launch of the Saudi Medical Program to separate conjoined twins, which has been running for three decades and has been receiving cases from around the world.

This is the 52nd separation procedure of conjoined twins conducted in the Kingdom, one of the most complex and delicate operations in the world.

The separation procedures are performed by specialized Saudi medical teams, whose number could reach up to 35 experts, including doctors and surgeons, technicians and nurses.

The total duration of all the operations together is approximately 600 hours, including an operation that lasted for 23.5 consecutive hours.

The number of cases that have been studied and evaluated so far amounted to 124 from 23 Countries  around the world.

The program is the only one of its kind in the world that covers the expenses of the operation, treatment, and post-operation rehabilitation, in addition to hosting the parents of the twins to keep them in the company of their children while undergoing the operation and during the recovery period.

This achievement reflects the lofty human gesture of the Saudi government and its keenness to provide welfare to other people, regardless of any considerations.

It also reflects Saudi medical excellence, which comes in line with the objectives of the Kingdom’s Vision 2030 in developing the health sector and raising its quality and efficiency. — SPA

Share your thoughts on the story, Saudi Arabia Medical Team Records 52 Separation Of Conjoined Twins with Nigerian Kicker in the comments section.