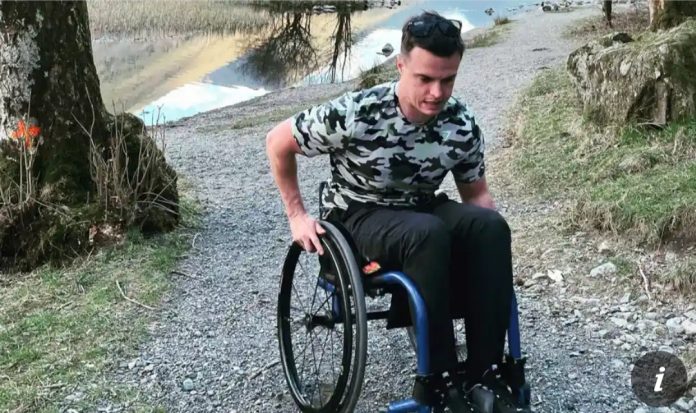 A wheelchair user, Chris Nicholson, has forcefully dragged himself upstairs at a Railway Station platform, saying staff of the Station allegedly refused to help him owing to health and safety policy.

Nicholson, an athlete and spokesperson for the Myprotein sports brand, was travelling to address an event in London on Friday when the incident took place at Milton Keynes station.

The former rugby player needed to cross to the other side of the station for a connecting train but the lift was broken, forcing him to pull himself up the stairs in 31C (88F) heat.

He said staff refused to help him use the stairs, saying they told him they couldn’t assist him because of “health and safety policies and they would be at risk if they helped me”.

“I decided to get up the stairs, how? By dragging my chair with one arm, pushing off one arm and collecting my legs each step of the way!” he wrote in a post on Instagram. He described being “in agony and tears halfway up”.

Nicholson said that another man had seen him struggling and helped him carry his wheelchair, before an assistant manager stepped in to carry his bags.

“We are in 2022, access should be a given not a privilege,” Nicholson said.

He called for policies to change “to support everyone collectively”, adding: “Things like this happen daily to people with different types of disabilities.”

In a video, also posted on Instagram, Nicholson spoke in detail about why he shared his experience on social media.

“People like myself who have different varying abilities to an able-bodied person should have the rights to access all amenities, like anyone else. Doesn’t matter if you are in a wheelchair, if you are on crutches – you should be able to access it,” he said.

Nicholson, who has more than 28,000 followers on Instagram, said that almost 3,000 people had messaged him saying that they had had similar experiences. “It’s absolutely shocking,” he said.

An Avanti West Coast spokesperson said: “We have been made aware of this incident and are sorry to hear about the customer’s experience.

“We have since been in contact with the customer – who has arrived at their destination safely on Friday night.

“We are also liaising with London Northwestern Railway – the train operating company responsible for managing Milton Keynes station – as they investigate the circumstances of what happened.”