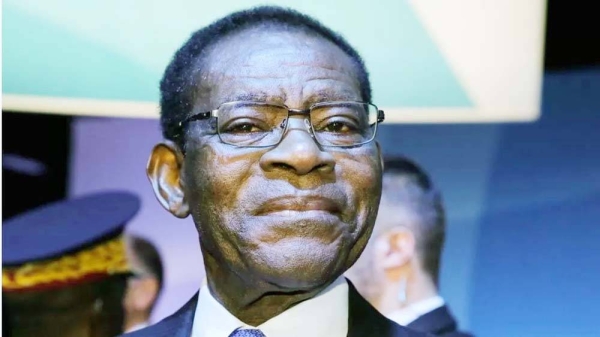 The world’s longest-serving President,Teodoro  Obiang Nguema Mbasogo of Equatorial Guinea. is seeking re-election to continue his 43-year-rule in that country.

President Mbasogo, 80, has presided over a regime marked by alleged human rights abuses including torture and disappearances.

Some opposition candidates are standing, but they are not expected to win. The president has a strong grip on the oil-rich nation, with family members in key government roles.

His eccentric son, who serves as the country’s Vice-President, Teodoro “Teodorin” Nguema Obiang Mangue, has allegedly enjoyed a lavish lifestyle in the US and Europe, and even owns an expensive crystal-covered glove which was once owned by Michael Jackson, according to the UK authorities.

“Nothing will change,” Professor Sá, who specializes in politics and authoritarian African regimes at the University Institute of Lisbon, said, adding she was “sure Obiang will be elected with more than 95%” of the vote.

This sentiment is also echoed by activist Tutu Alicante, who told Reuters news agency: “On Sunday people will cast the vote government expects them to, because you cannot freely speak up your mind in Equatorial Guinea.”

“The opposition does not stand a chance,” Alicante continued. “He is going to do whatever it takes not to leave power.”

Political opposition is barely tolerated and “severely hampered by the lack of a free press,” as all broadcast media is either owned outright by the government or controlled by its allies.

It is thought that President Obiang, who has previously denied rights abuses and election rigging, is seeking to clean up his international reputation. In September, the government abolished the death penalty, in a move which was praised by the UN.

President Obiang, who has survived several coup attempts, seized power of the oil-rich West African nation in 1979 after a military takeover.

Upon gaining office from his predecessor and uncle, Francisco Macias Nguema, he made some reforms, but retained Nguema’s absolute control over the nation.

Nguema, whose rule saw thousands of deaths and a mass exodus from Equatorial Guinea, was later executed.

President Obiang has managed to maintain his grip on power due to controlling “the rules of the political game” Professor Sá said, adding that he uses the poverty of the nation as a “political weapon”.

Meanwhile, “electoral laws were conceived to make sure Obiang will never lose power,” she commented.

The country has a history of what critics call fraudulent election results. Officials said President Obiang won more than 97% of the vote in presidential elections in December 2002.

Opposition candidates withdrew from the poll, citing fraud and irregularities. Similar results were also reported in the 2009 and 2016 elections.

There have also been accusations of corruption leveled against the Obiang regime, after his son Teodorin Obiang was fined in a French court for using public money to fund a luxurious lifestyle in the European nation. Obiang’s French assets have since been seized.

The vice-president, who is in pole position to succeed his father, was also sanctioned by the UK under an anti-corruption drive in 2021.

More than 300,000 voters have been registered to take part in Sunday’s vote.

In 1968 Spanish Guinea gained independence and became the Republic of Equatorial Guinea with Francisco Macias Nguema as president.

Rights groups have labeled the country’s two presidents – Francisco Macias Nguema and President Teodoro Obiang Nguema – as some of the worst rights abusers in Africa.

The Spanish, French and Portuguese-speaking country discovered vast oil reserves in 1996, but much of the 1.4 million population has not benefited from this, with poverty still rampant. – BBC

Share your thoughts on the story, World’s Longest-Serving President Seeks Re-election In Equatorial Guinea with Nigerian Kicker in the comments section.